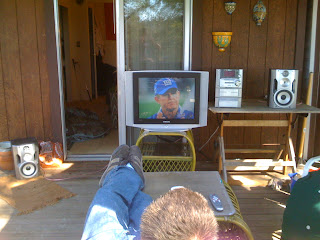 So the steelers are now the best team ever with 6 super bowls huh?  mawfuck that shit....9ers por siempre yadig?  At least the game was tight (in the 4th quarter).  Guy slid through and got lost in the forest (as most do when they come to the pad for the first time) pero he found his way before sasquatch could get at him.  Guy and me attempted to meet with Andy Mags and bro crew several times to no avail.  Erry time we arrived at the desired destination we would miss our window porque we drank beers and chopped it up in tha whip.  Finallys met with Andy Mags and his/J-Dog's pad.  By the way J-Dog is Andy's term of endearment for his lady.  I hella didn't go mimis at an inappropriate time, so put one in the win column for yaboy!!!
Guy and I commenced to set up the outdoor super bowl viewing and "rage way good."  Before raging began, we had to swoop Cristina who snuck out of her retreat in Aptos straight prison break stylee.
L to the... took a page out of Guy's book and got lost in the forest for hella days but he called me from some vieja's pad to get directions.
Needless to say when all was said and done super bowl got done way good...
Posted by The Stereotypical Sleepy Mexican at 5:54 PM