CHEAAA!!!! i don't really know what to say. i'm still pretty speechless. i recorded the master copy on the 16 track last night. all that means is i should be able to burn copies for folks... but i can't... lo siento, pero it's 2 HOURS!!!! hella not fitting on a cd. but i can record that to cassettes now. which i will do and ship promptly. i'm guessing i'll drop those in the mail on thursday. as for the digital copy... i'ma make that happen. i'ma record it to my palm recorder. somehow get it on a computer... then i'm zip it up and email it... if i winzip... or winrar the file i should be able to email it right? if anyone knows what it do do holla atcha boy. which brings me to my next idea/matter of business.. how bout a focho email list? everyone on it gets emails with new music put out by the folks? obviously only things folks are down to kick down... but i think everyone's down. i'm HELLA down.


so for those of you who were in abudabi and didn't catch wind of the madness that unfolded this past weekend... Little Batteries Vol. II was thrown down. these boys came through and proceeded to THROW DOWN nothing but goodness. i still haven't digested the full course of awesomeness i witnessed.. and probably wont ever.... yes, it was THAT good.

ALSO.. i did a horrible job documenting with my camera but i started this post last night after recording the master.. i was too hyped to go to sleep... then i passed out. so i'm finishing it! hopefully one of these guys got better fotos. 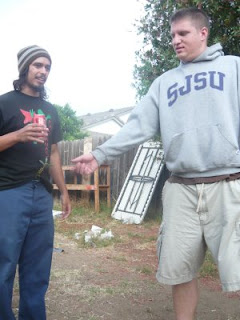 hold up! TEAM IN THE BUILDING!!! (find lydon losing it.. alot of those kinda laughs were had) 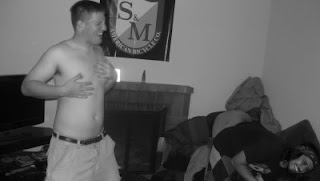 the wonder boy holding it down at home base. 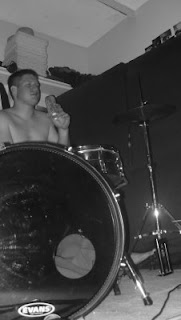 after jammin in such a small quarter with no ventilation this is what peeps look like. 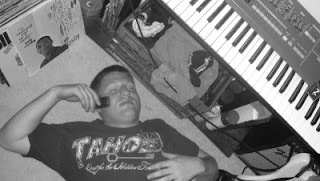 we started the official AAA recording on sunday the 11th at 12:25 am.. (i only know cause i dropped a time stamp in the middle of the recording) my neighbors may not have been stoked on this but no one said a word during the entire 2 hour session. if you've ever had the pleasure of experiencing the 1st little batteries tape you know how LIVE folks get on the noises.. in this pic L is killing the scratch moves and the mpc at the same time... words don't do justice. hip hop @ it's finest. 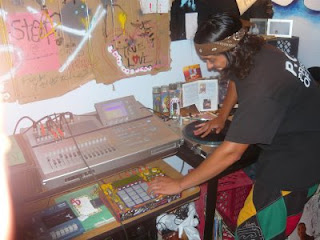 this pic is deep in the session. as you can tell from guys extra lax positioning we were all gettin slightly drained... but i'll have you know, they was absolutely NO HALF STEPPIN whatsoever. the GUYtar is spectacular. you know the magic i'm talking about... if you don't i'll elaborate.. at some point in the recording the mpc is playing a just a snare and guy is soloing. the drum machine keeps perfect time.. it's a machine. well you get so mesmerized by the GUYtar that he pulls up on the reigns and slows the beat down... i swear, one of the snares in the recording sounds off. i'm pretty sure it's cause this guy kills it so lovely you get stuck... next thing you know it sounds like there's another half count in there or sonting. i don't know. too GOOD. 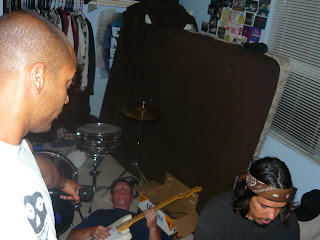 i've said it before and it'll be my last words... i love you guys.