september is over. i mark my calender with happy faces because it's a great way to start your day. when i was working in s.f. the store i worked at was next door to a halfway house. i needed a delivery driver way bad and the only guy who applied was a resident of this halfway house.
Greg Huffman.
super rad dude. he would always go off about some crazy conspiracy or the supernatural. (not the rapper cyph)
needless to say he was waaaaaay fun to work with.
@ the time i was going through a real tough adjustment period. trying to make sf mine and it wasn't working. greg knew all of this and would give me little tips on how to maintain a positive outlook.
optimisms a mother.
the one tip i'll never forget was the mirror trick. he said the first thing i should do everyday is look in the mirror and ask myself out loud how i felt on that morning.
now i'm no psychologist.. but that tricks works. the first time i did it i couldn't keep from laughing. i felt like i must be insane to be asking myself how i feel. but something about saying it and hearing yourself say it works. i don't have to say it anymore to feel it.

i just mark my calender. 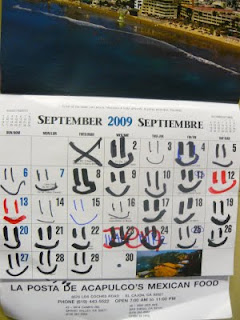 hats off to akai professional. they make os updates as easy as possible. i will be a customer for life. i can't wait to cop my NEXT buddy!
(someday right? i'm too poor for that shit now) 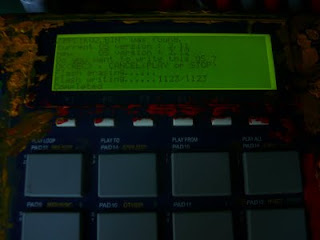 so what do you do after you get the new bad as os for your mpc? make a song !!! well, with the rough draft of lydons cd already floating around i've decided to start work on the third installment of Audio Scribble. the working title for this volume is "day jobs and secret weapons."
and my first vocal donor? jay-mi from malibu. my favorite jay-mi story involves the song shove it by santogold. dirdirt was playing a song on the computer and saying that the song was her ringback tone thing. "yeah this is the one about shutting doors right?"chris questioned...

"nah, i think this says We think you're a joke shove your hope where it don't shine." i corrected

"well jay-mi says the song sings, We be gettin doors shut that don't shut" he relayed..

next day she's at the house singing about shutting doors....

now some people may think i'm taking advantage of her naive nature.. but those people need to understand that i am such a good salesman i had jay-mi all in on the recording hype... askin me when the next time she could record was. she wanna drop an e.p. n shit. to which they argue, "but you're gonna make her look like an idiot." nah... that's not my style. i make fresh beats and paste your words on them. if anything i'ma make all the dumb shit she says slap. then you can dance to it. and besides... who listens to lyrics anyway?gar-beats-raps? 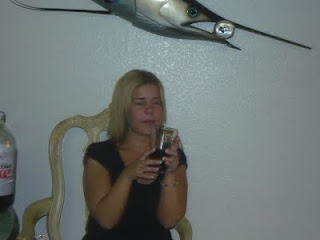 i went to a beer party. it was filled with med students.
they have a very different sense of humor. different from mine at least. i can dig it though.
ohhh yeah... and they're waaay into pit stains. holla! 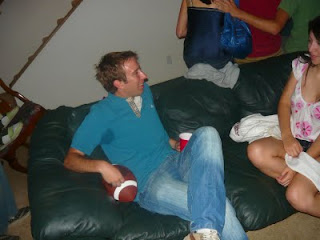 a perfect example is everyone coming up to me saying "i love the pull my finger shirt!!!" 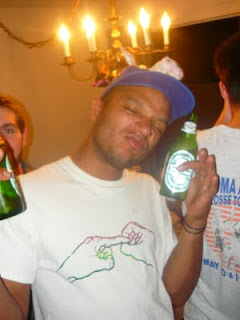 like this guy who had the cali-fart-on-ya t. he demanded we take pics together. 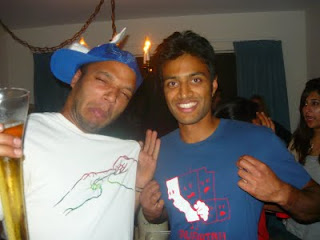 this was taken on the drive over. shaw drives a 300z. 2 seats baby! and it's got a manual tranny. 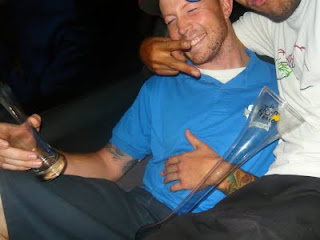 i'm a fat ass. no joke. i eat like an animal.
this plate is covered by a plate sized steak that i grilled for about 40 minutes to an hour. beast steak. i grilled the potatoes and onions as well for a very heart dinner. meat n tatoes. think of just putting 2 potatoes on a steak. hella yes MAN FOOD!!!!!!!! can you feel the testosterone?
(lydon... yes... i used a whole onion) 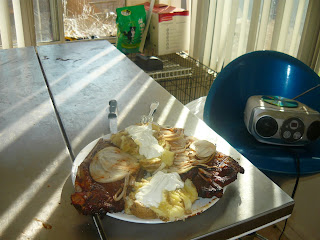 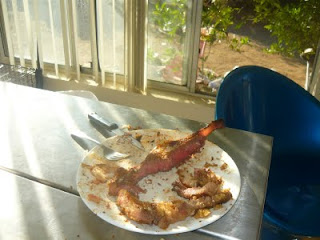 i've been having a really hard week and today is saturday. my saturday. so i'm updating the site like i promised. i day dream alot. perhaps it's my way to escape reality. daydreaming is awesome, but when you're done you're still here in this lovely world. i get really stressed and freak myself out once in a while. definitely not as frequently as i used to... i guess i'm gettin better at this whole sanity thing. pero chea! now i feel like i can enjoy my days off and prepare myself for the coming week. whatever... i've rambled enough and will now leave you with a picture i took right outside my "office" . 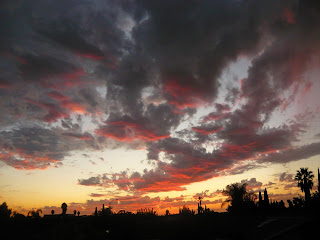