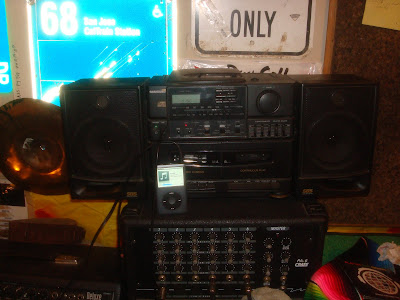 Old school Boom Box's and radio's for those of you who are in the know are incredibly valuable. For those of you out there who, for some reason may not know (obviously no one in focho) Imma break down the under world value of old school boom box's which are easily discarded by most in American society but which are considered invaluable by others.

From my personal perspective there are two categories of boom box. There is what I call Focho box's and then there are those that I would call Site box's.

FOCHOBOXs = any type of old school boom box usually retrieved from a goodwill or garage sale or a grandmas closet, that is just the right size to be carried around while walking or riding a bike.
In these box's we look for sufficient slumpability. that is sufficient power and slump for that good boom bap hip hop/ soul, funk, blues , ranchero.. ect. These box's must have more capabilities than just a radio. Preferably a double tape deck, and/ or CD player. Tape decks in this case are more preferable because first they are awesome and have recording capabilities, but also because there is no skipping problem while on the move. However, there ARE CD boom box's with sufficient skip protection, and we don't discriminate. Along with these characteristics it is also very valuable if one is able to find a way to utilize an i pod with the, pre i pod nation era, boom box. This is normally accomplished through an RC cable IN or though some sort of other audio IN jack. The ability to use the I pod is obviously valuable because there is no need to carry a bag o tapes/ CDs while bringing the party with you and the problem of skipping is also averted.

The FOCHO box is the prime companion to anyone who is interested in making IT happen where ever they are which is obviously one of FOCHOs specialties.

The SITE BOX is on a somewhat different level, it is any sort of boom box with a radio that can be plugged in and used on a construction site. In the world of construction sites the ghetto crappy radio is like gold. Only the contractors, (AKA the boss's) who are usually white and only bump KFoX (no offense to KFOX)can afford to have the bad ass yellow Dumont construction site digital radio and cd player capable of being thrown out of a second story window.
Most of the workers on any work site, I would go as far to say, in the entire country, are bumbing there music/ talk radio form some sort of ghetto radio player with a duct taped cord and antenna. These radios are obviously going to get messed up and the life of one is usually no longer than a year or so. The only necessary characteristics of these Boom box's is that they have a radio(dont even need both AM and FM, just need one). They need to have a cord so they can be plugged in because they are left on all day every day and using batteries would be hella expensive. It is also preferable that they have a working volume button because there are times when owners or other rich people may ask you to turn it down.

The two other guys I work with and I pride ourselves at being good scavengers of these site box's, and good repair men od them as well. Just to take you through a couple of examples. A couple years agoo my co worker Megel retrieved from a dumpster a purple plastic boombox probably form like 93 which had at one time a tape deck, which no longer worked, it did however have a radio with only FM capabilities, this one lasted us a good year or so and we were quite protective of it. The volume and radio eventually stooped working. After that Javier another co worker, came up on a large table top clock radio or somsort looked like it was form the 70s the clock didn't work but the radio did, you needed to use a flat screw driver in order to change it form FM to AM but they both worked. This is still some what in use but the FM no longer works.
After that I had some how acquired a little radio that looked like an old school jukebox from the 50s, my grandma gave it to me I think, it only had a radio but put out a lot of sound for a little guy. More recently I found one of my dads old site box's that he used in the 80s but had given it to my grandma at some point. I found it in her closet and it has been the pride of Sean Anthonys for the last 5 months. 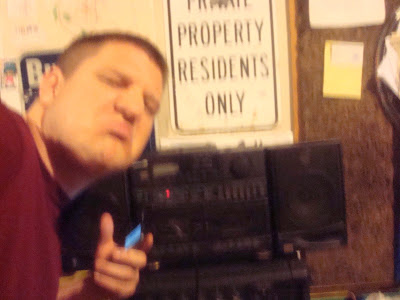 Focho, te presento a mi nueva Fochobox. Went to my grandmas on sat to do some clean up and some visiting. I handled the living room and while moving boxes and what not form behind the couch I came across this amazingness. Grandma said I could have it but didn't know if it worked.. It does and THANK YOU Grandma!.

The new addition to the focho boom box collection is quite amazing, after thorough inspection, both tape decks are in full working condition, as well as the radio complete with unbent antenna. The cD player at first seemed not to work but if your c d is not burnt and you give her a little time she'll come through. The equalizer is money and the slump action is quite full. At first I thought there would be no possibility of I pod accompaniment, but on the front there was what I think is a jack for a microphone but when plugging in the ipod it works perfect so needless to say I am thoroughly stoked.

So FOCHO get excited for the new addition to the family of FOcho BOX's ready for the next mobile madness YEEE!
Posted by un Gileno de Focho at 6:38 PM 2 comments:

Just wanted to put up a Happy Birthday to Cristina on da FOCHO.Cizzzom, Your Amazing Love and We all Love you.
Posted by un Gileno de Focho at 6:34 PM No comments:

This is a crowd giggin at two different hip hop festivals to a track I made with Chinese Man records. Apparently I am hella felt out there. The dude was tellin me that folks want to hear more shit from me so i guess I just gotta give the people what they want. My E.P. will be dropping in April! You all will recieve copies. I also am working on a full length album with my cousin Kyle (NoOne Beats). That shits gonna be FIYAH!!!!!!!! I love you all and miss Black like a skinny kid miss delicious. (by the way Jay Elctro is the dude. Been knowin, shoulda shared. My bad cutty)

Links to this post
Email ThisBlogThis!Share to TwitterShare to FacebookShare to Pinterest
so.... when i posted that fat joe track i really wanted to post THIS one... i haven't really listened to any of this dudes other tracks.... but THIS shit is fire. hope ya'll dig..

but everyone probably already knew about all this and didn't tell lemme know...

p.s. he gave erykah badu her third child, bringing the baby daddy count up to 3
Posted by Paisa 1er at 7:18 AM No comments:

Still lacking any real data pushin', so I can't quite do the big Focho update I've been wanting to do. This dude is a G, check for a second at like 1:22. Can't wait till I pick this up...

this has been gettin a ton of airplay out here. i dig the beat... the flows aight...
aint no big pun...

ummm.... headin out to eat at some spot in mid town with the lady...

aight..
peace to the place where the sun sets.


-Moonter Lvoe
Posted by Agent Frank at 9:17 AM No comments:

Links to this post
Email ThisBlogThis!Share to TwitterShare to FacebookShare to Pinterest
thanks for the call boys.

to those of you wondering.. i made it to new york last night around midnight. this has been quite possibly the most spiritually gratifying adventure of my life thus far. i can't begin to articulate the beauty i've witnessed over the last week n a half. so i'll be making a slide show in the days to come. i miss you guys terribly... but i'm extremely grateful you made that drive and sent me off with those memories. gawd, i'm super reflective right now and can think of nothing more than the fact that i need to get it crackin in this mug so the homies can come out n smell it. also... i've noticed that people are stealing photos off of websites i post on so i'll be dropping stamps on everything i post from now on. this is going to make my job a lot harder but props are due n i aint no sucka. nuff said.

really quick... i REALLY want to thank Cristina for EVERYTHING. i really can't thank you enough for your hospitality and part in helping me fall in love with az.. so on behalf of steve and myself THANK YOU!!!! 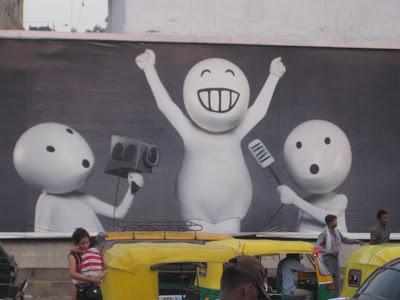 Life is rough with no internet (well, at least no Focho), and the wack upgrade to real crummy internet is not much better. I need to sign up for Compuserve again! (Pinche Wanslow bringing up Lycos n shit) I'm struggling to get just one single picture up right now, and it really has no relevance to this post. But still I'mma fight like I eat ribs, to the bone, to get it up (that's what he said?).

- I moved to Potrero and 25th. Come BBQ at my house on Fri after work! Maybe some late night B-Ball next door if folks wanna get balled on (all homo)...

- Happy Birfday to Cuzzin Beary! I just ate my other half a cabeza super burrito from that night and it beat the shit out of my stomach, literally!

- Time to study. MPC 1000 handbook and Cubase SX3, gotta start over to truly be fresh. Cheah!

Dumbfoundead - Super Barrio Bros.
Gap Band - V Jammin
MF Grimm - The Downfall of Ibliss (used to hate on this shit sooo hard, but some of the beats are just too tight. #3 is a dope song as well)