If only it were that simple. Our country breeds this strange sense of entitlement, one in which people feel they deserve a Jones-esque lifestyle simply because they were birthed on this side of the fence. That's all fine and well, but the strangeness comes from the idea that there is an imminent need to "preserve" these "rights" by disallowing "foreigners", non-conformists unwilling to assimilate to our "correct" standards of society, from entering, and thus infecting, this pure society. To this I say, fuck all that noise. 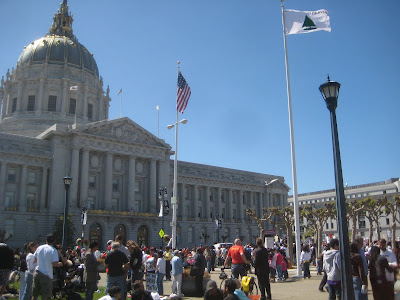 Let's be real; people just don't want an influx of brown murkin' up the pristine, blue (eyed) waters of America. Canada brings hockey sticks and maple syrup. Mexicans bring crime and dependency on government aid. What are the most sensationalized issues regarding illegal immigration? Hmmm...

- They don't pay taxes and use up all our social services. - So, sales taxes don't count? They may not pay federal taxes, but undocumented workers are paid a fraction of the salary of their unionized counterparts, leading to an increase in taxable income for their employer. In theory, this would offset or increase the actual taxes paid, since the employer is likely to be in a higher tax bracket than the undocumented worker. However, we all know that the rich will find ways around taxes. So who is the real criminal??

- They commit violent crimes and we can't track them. - Yes, some illegal immigrants commit crimes. All of them? No. Most? Not close. Even a substantial percentage? Not at all. Let's just chalk this one up to common sense.

- They refuse to speak English or make any effort to assimilate into American society. - You ever learn another language? It's not easy. Oh, your great grandparents were from Italy and worked hard to be accepted into American society and were never given any help from the government, so why can't the Mexicans? Great story, bet it didn't happen overnight, or in a single generation for that matter. It is far and few between where I encounter Latino folks who cannot speak/understand even the most broken, basic English. Any reluctance to speak English is simply because many non-natives are embarrassed to speak and make mistakes. Again, common sense.

- They took our jobs!!! And they just send all the money out of the country! - You or your pussy ass kids ain't gonna pick no lettuce for $4 an hour, so shut the fuck up. And yes many undocumented workers do send money to their families. Not ok with you? Check where everything you own is manufactured and tell me how much of your money stays in the good ol US of A. Late. 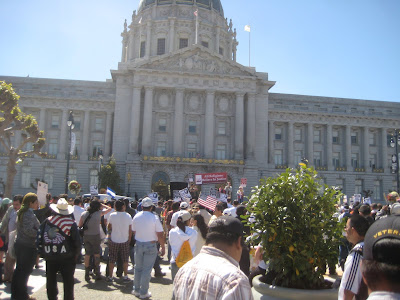 The world is locs. It's all too common that common sense takes a back seat to media hype and unwarranted fears. We need to be constantly reminded that we are the thinkers, the progressives, the scholars, the framers of morals and culture and everything we hold dear. Focho all damn day, tell me otherwise!!

The pictures are from the SF MayDay rally in front of City Hall. These are the only two I got to snap off before my battery died. There were plenty of folks there, I stayed for a good 20 minutes and listened to some inspiring words and songs.