The essence of my life 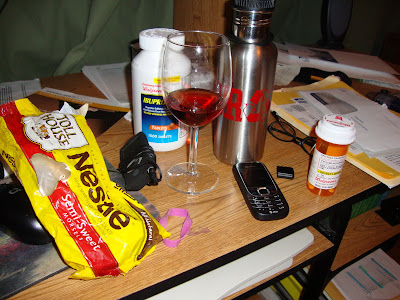 Ey FOCHO. Just wanted to share this picture which captures the essence of my life at this moment (10:50pm on a Saturday night)...Yup, chocolate and wine for the depression, a 1000 tablet container of Ibuprofin and muscle relaxers for the pain, my IPOD (note: currently in off position), the cap to my zip drive which is in my computer since I'm currently working on my thesis, a water bottle cause it's fucking hot and I'm trying to drink at least two cups every day, and my phone (note: also in the off position as I wait for Austin...but that's the story of the past 6 years so nothing new there) lol
Ah asi es la vida, pero creo con todo mi energia y pasion que todo vale la pena.
Posted by the feminine voice of FOCHO at 10:38 PM 1 comment:

salude! to good health and sunshine.

first off let me apologize to my focho familia for neglecting the site. i've been SUPER busy as off late and it almost seems as tho there isn't enough time in the day. between my week back home and some of my folks makin the trip out here to peep game i'm sittin on almost 3,000 photos. i don't know what to put up so i'm not going to put any...yet. i have a plan but it's going to take me a minute to get situated so i can throw it down.
my mind is pretty roached right now. there's sooo much i want to write and share. soooo many photos(!) i want to share..! but all in due time i guess. i know my folks are out grinding. making moves. keepin afloat. sometimes you need a break so you can come back twice as hard. by the time i move into my new spot (EARLY next month) i should have a computer which means i'll be bloggin like whoa in no time. i have some pretty big plans.

my a.d.d. is killing me right now and i'm about to step out so i can make my way to work. 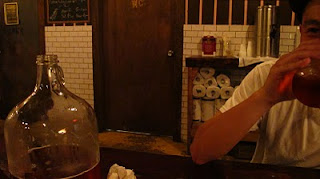 then i realized i don't have to be at work till three... SOOO... while i have your attention i'd like to introduce you to my new roommate Lawrence a.k.a. LO a.k.a. DJ ELOFADER.
like i said.. moves are being made left and right.
aight... that's all folks.!

oh yeah.. THIS HAS BEEN MY JAMBONE AS OF LATE LATE!!!!

Aye guey! Last weekend, there was a taco fair in the park across the street from our casa... those tacos didn´t stand a chance! There were like 20 different taquerias reppin their wares in a major guey. My fav were these standard al pastor tacos covered in piña and all types of deliciousness, and luckily for me those folks have a taqueria right around the corner from us. 2 por 1 taco orders on Thursday? Yeah, I crushed 10 in a row, with 3 beers, only about $6. Late.

This morning, we watched the first game of World Cup: Mexico vs South Africa, at school, instead of class, and they let us drink beer! My maestro brought us Mezcal and we all got pretty saucey. Pimpin.

I am very proud to announce the amazing miracle that is Nyla's second child being born today! She is a beautiful little one named Emma. She was born 7lbs 15oz. A very healthy baby. I don't have pictures yet, but I'll post them as soon as I get them. I loves you all! Call Nyla and Congratulate if you get a chance.