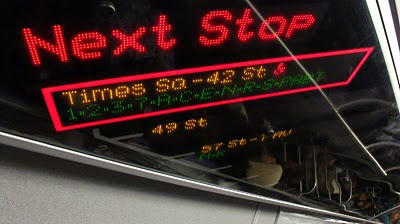 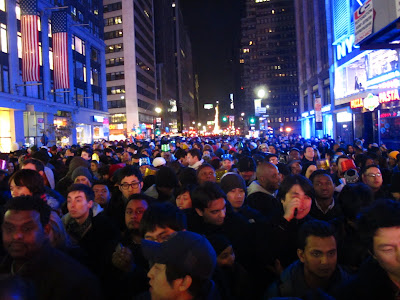 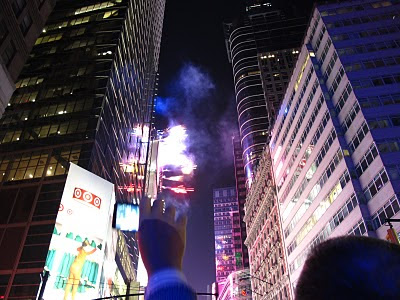 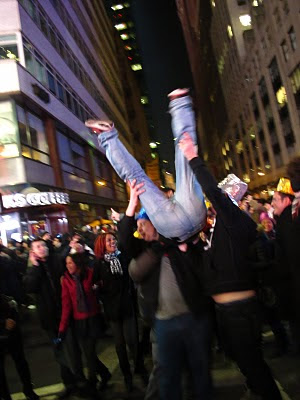 i'm starting this at 10 am 1.1.1011 and it feels good. last night was strange. i uploaded the video and just kinda hung out in a trance. i didn't feel like going out much. and then something clicked, that feeling that i COULD be doing "something." so i let the idea of times square marinate for a hot one. the longer it marinated the more i realized it was something i "have to do in my lifetime." so i grabbed my camera and made my way out to the party. completely sober mind you. so i get there and it is of course chaos. the police had a handle on EVERY block and i kept hearing helicopters. terrorism is an interesting concept of sorts. once they plant the idea that some shit can happen, you get people like me who don't really feel "safe" on the subway or in high profile gatherings. considering times square was evacuated shortly after Diana n i left on may 1st of 2010 i guess i've always got this anything can happen mentality that can work to my disadvantage. pardon the tangent.. it was more about the ghetto birds... so yeah, the cops had everything on lock and people were smashing forward trying to get closer. the energy was straight BOKERS. people just mashing forward in hopes of catching a glimpse of the ball. i've never heard that many languages in such a small proximity. and of course the couple of teenagers next to me who kept inching forward while yelling, "yo(!) fuck this bullshit my nigga! we need to be up front my nigga!" only in new york. so once the cops let down one of the retaining fences it was a human scramble to the wall of onlookers already in position. tight quarters to say the least, with no room for advancement... unless you're a teenager from nyc.. then you don't give a fuck and just start cutting through the crowd. so i said f da bs and jumped right in line with the youngsters. making moves left n right. i followed them for a good while saying, "yo that's my son up there!" hahhaa! good times. i don't doubt that those kids made it all the way to the top of the coveted red stoop. they were on a mission. at some point they ran into an older lady who wouldn't let them pass so i called it a day and decided this was my vantage point for the evenings showcase. yeah, they dipped around her shortly after. so i've heard in order to see the ball drop you have to be in times square around 2pm and wear an adult diaper.(obviously not if you're a lil rude boy) now i'm not sure if that's 100% truth, but i wouldn't doubt it. something that actually bummed me out was the actual countdown... there was none. i don't get it. i thought that's what new years was about. counting down those final seconds of the year in preparation to scream your fucking face off and kiss the one you love.(or you're with) but there was no countdown. an estimated 1 million people and all i wanted was to FEEL the countdown in the middle of this melting pot. can you imagine that? hella different languages? fucking screaming 3-2-1 HAPPY NEW YEAR!!! well, it didn't happen like that. haha. people just randomly blew up into the happy new year part. either way it was still pretty cool. a bucket list novelty of sorts. i've always said my time here will be spent in my routine forgoing the "touristy" stuff until there are visitors who really wanna see coney island or the statue of liberty. but this one i couldn't pass up. when you don't have shit to do, why not dooda most?

speaking of the most.. i'm reviewing 2010 via WWW.FOCHO.COM. looking over every post to assemble this one right hurr.. i know i said i wasn't going to do my long ass 1st of the year post again but i have to. i read the one from last year and it just pulled up so many thoughts.

how good was guys breakdown of the BOOMBOX???!!! kinda funny, when i read the comment i wrote regarding your thorough post i was reminded of the 2 porta knockers i came up on this year. both with broken tape players at the time of purchase. i fixed both of them.. and now they're BOTH broken again. haha! call it a new years resolution of sorts.

as far as making poor fun i would say this post was waaaaaaaaaaay up close to the top of the list. we all already knew the value of cooking as opposed to eating out. but never before has the fun that is poor been broken down mathematically. good stuff my dude! p.s. i'd like to see more of this in the coming year.. shit was thorough.

politics can be a sensitive area. people can become enemies REAL quick over politics. my old boss in san diego used to say the bike shop had irish bar rules (for conversation) no religion no politics. because it can get out of control QUICK. next thing you know you have folks at each others throats. (I LOVE MY FUCKING LIFE!!!!!!!!! i started listening to a curtis mayfield'sweet exorcist record a minute ago and "power to the people" just came on. great song.) but i think we at FOCHO can all agree that we stand for the working man. Guy on the may day history, present, and future.

sb1070. lobbied by those invested in the correctional system. fucking disgusting. simply/bluntly put. breaking my heart. FOCHO knows how i feel.

dude, the giants won the world series. i'm not a big baseball fan. actually not at all. but i do enjoy seeing my fellow bay heads in hysterics! folks were BUGGIN out! sooo good. i even went as far as too make an sf cap out of insulation while my roomate dj elofader made this lil hottie!

i LOVE this post for soooo many reasons on sooo many levels. the world need more of this.

i also love the HUGE photo dumps. this one had it ALL.

props to the folkers who took FOCHO to oaxaca. CHEAA!

i would also like to thank those who took part in bringing focho back! focho christmas that is... my new years resolution is to actually attend this year! can we do it big? please? cristina you better be there as well!

two amazing artists. both will be miss dearly and remembered for their contributions to this world of music we love soo much.

i know i said i wouldn't do it... but i kinda did it. a lil different. that felt good. going through each post and reliving the year in focho.

i love your life.