First off, if you haven't checked this link:

BayRail Alliance: Save the Caltrain!

please do so and send a letter to your local officials that says that you want our city/county/state government to do what it takes to keep Caltrain afloat. 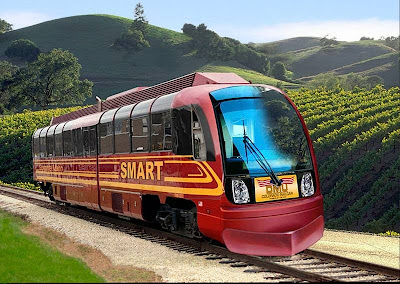 I first heard of a new commuter train in the North Bay like 5 months ago, so I decided to look into it further. The Sonoma-Marin Area Rail Transit (SMART) has been in the works since 2003 (official talks of a passenger train date back to the 70's), with official funding approval in Nov. 2008. The rail is already in place, so it's just a matter of retrofitting the stations, working out logistics, buying the trains, and it's a go. People are already hating on it due to financing issues, but if you've ever driven 101 during commute times up there, (imagine the equivalent of a 3 hour drive to Gilas from SF) you'll know exactly how necessary alternate transportation options are.

I really should have a separate blog for this kind of stuff, but whatever, I just want to let other people know about issues and big changes occurring right across the way. Hopefully all the issues Caltrain is experiencing are being worked out while the SMART system is still in the planning stages. I stays sustainable son!!!!

Also, I've always known about downloading albums, but yeah, been up on that. Trying to catch up on that Hip-Hop since 2006...

Mr Lif - I Heard It Today