this is one of dee's favorite lots in bushwick. they finally got the bright idea to throw a huge mural on the predominant wall and sure enough, within a couple of days it had a throw up on it. -hate 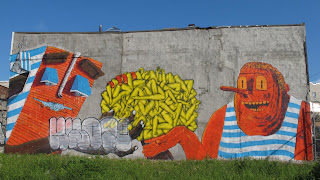 my fellow brooklyn SUSPECT stepped his game up in an instant. be on the look out for that GOOD work son. -love 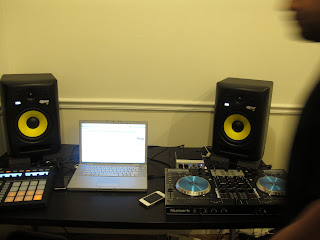 what do stained glass, records, and a framed focho stencil have in common? this photo by diana d. after this year i've decided that no matter where i am i'll try and get to nyc for the fourth of july. this is a pic i ran up to the roof to take as the sun was setting. i've been in brooklyn for the past 2 fourths and have yet to be let down. i don't do the hudson display... maybe next year. i just like kickin it on the roof and getting the 360 bk rooftop show. it's surreal. everywhere you look they stay poppin! it's sooooooo gooooooood. i wanna spend next the next fourth with you in nyc... make it happen! 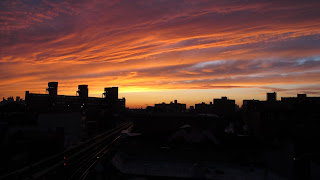 at the moment i'm trying to figure out how and where to invest. plane tickets? music equipment? honestly i wish i could afford both but it's not going down like that. so we'll see. only time will tell. summer is here, and as far as i'm concerned i'm in the most cracking place around. i made a bunch of copies of the CHAKA ep and have slowly started to move those. IF YOU COPPED MY CD IN UNION SQUARE ON SATURDAY NIGHT AND ARE READING THIS NOW, THANK YOU. i've been making music for almost ten years and only now do i feel like i've matured enough as an artist to actually "sell" my "commodity." back to the grind ya'll! i'm about to go diggin and then hit the lab n get my chop chop on on. yeeeeee!
Posted by Agent Frank at 4:48 AM